Where do I even begin to talk about my monthlong stay in Portugal. First off, I can’t believe a month has already gone by that I’ve been back home in the states and that only now did I have the time to begin going through all the photographs I snapped. And there are a lot! I wanted this year’s trip to Portugal to be different than the numerous other vacations I’ve had growing up. I wanted to embrace and fully experience the country that is more like home than anything else. With family dispersed through different cities, I planned to take advantage of my flexible time and get to actually know these parts of the country I’ve merely seen in passing all my life.

When I travel to Portugal I often stay at my family home in the mountain farmland region, as I often refer to it, and then venture off. But this year I started my site-seeing as soon as I stepped off the plane. Lisbon is the capital of Portugal and has quickly become one of the most popular cities for tourists. In fact, it’s made it to the top of every must travel list this past year and it makes me so proud knowing others have fallen in love with Portugal.

With my uncle and aunt living in one of Lisbon’s beach towns, I savored their lovely company for a few days and had myself the best tour guides a girl could ask for. We saw more of Lisbon in one single day than most might see in a few days, which is why I have to break up my trip into several blog posts.

I saw so many beautiful sights, most of just ordinary life or historical buildings, but it was magic to me. And I left this amazing country more in love than I’ve ever been with it… 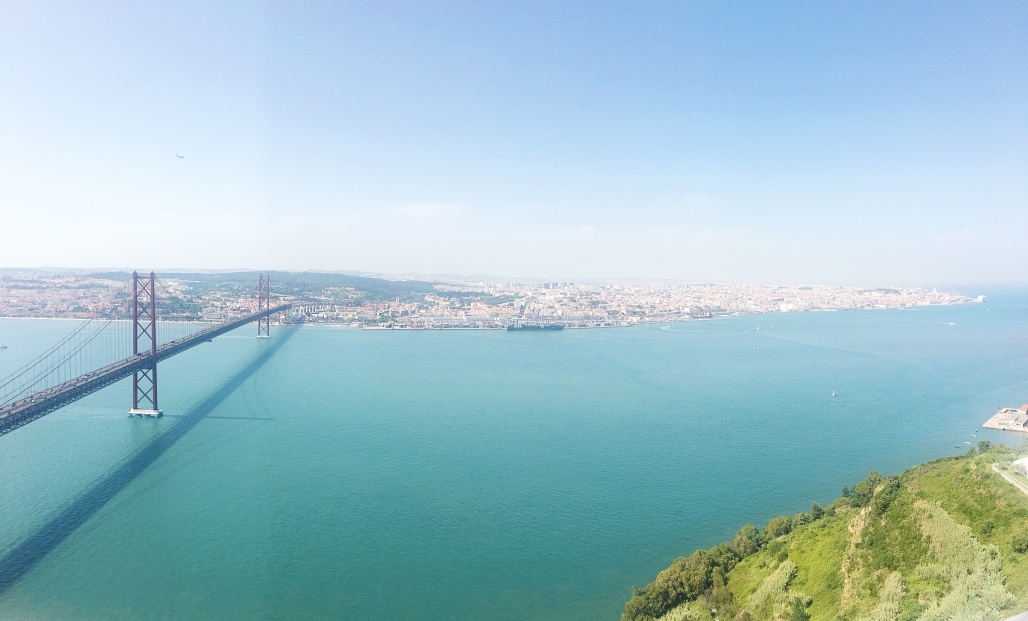 Lisbon’s skyline is one of the most well known of the country. Yes it’s got views of traditional terra-cotta tile roofs and the gorgeous blue bay, but it’s the iconic red Ponte 25 de Abril that is Lisbon’s most notable landmark. Even if you’ve never seen a photograph of Lisbon, you may notice that our bridge looks oddly similar to the San Francisco Golden Gate bridge, that’s because they were both built by the same company. Venture to any of the coastal towns of Lisbon and you will find walkways, parks and “esplanadas” you can snap beautiful shots of the bridge and surrounding views. 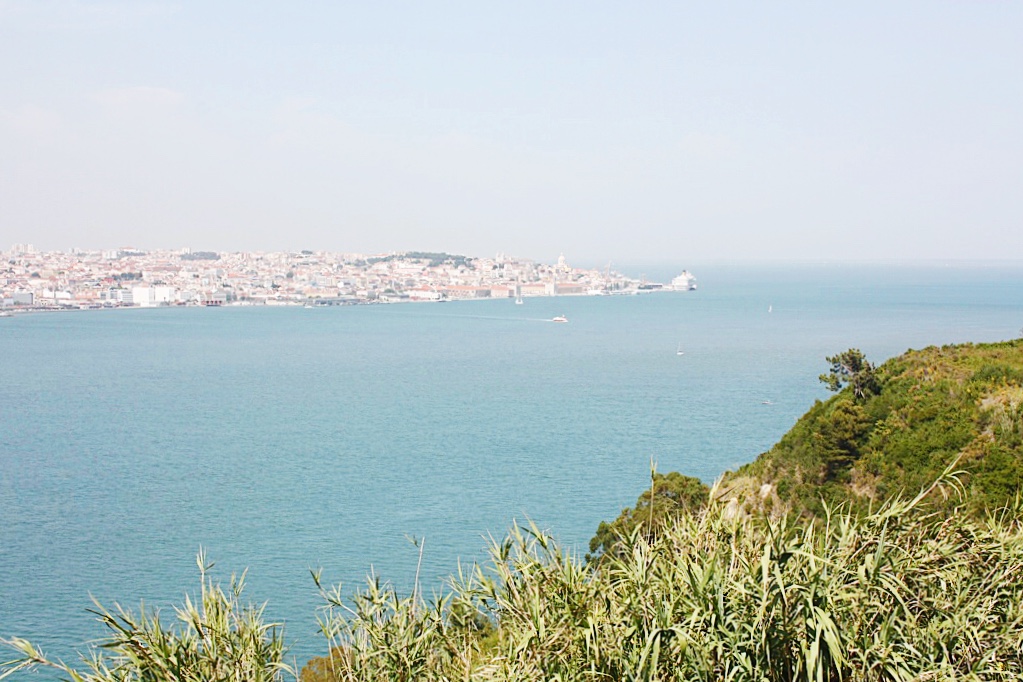 But the best view of the bridge and city of Lisbon, is atop the Cristo Rei. Although a religious sight, the enormous statue of Jesus Christ boasts a quaint chapel and some of the most stunning views of the city. It’s nothing glorious, but it’s a trip that takes less than an hour to experience and you get to see just how much of Lisbon you’ve got to discover down below. 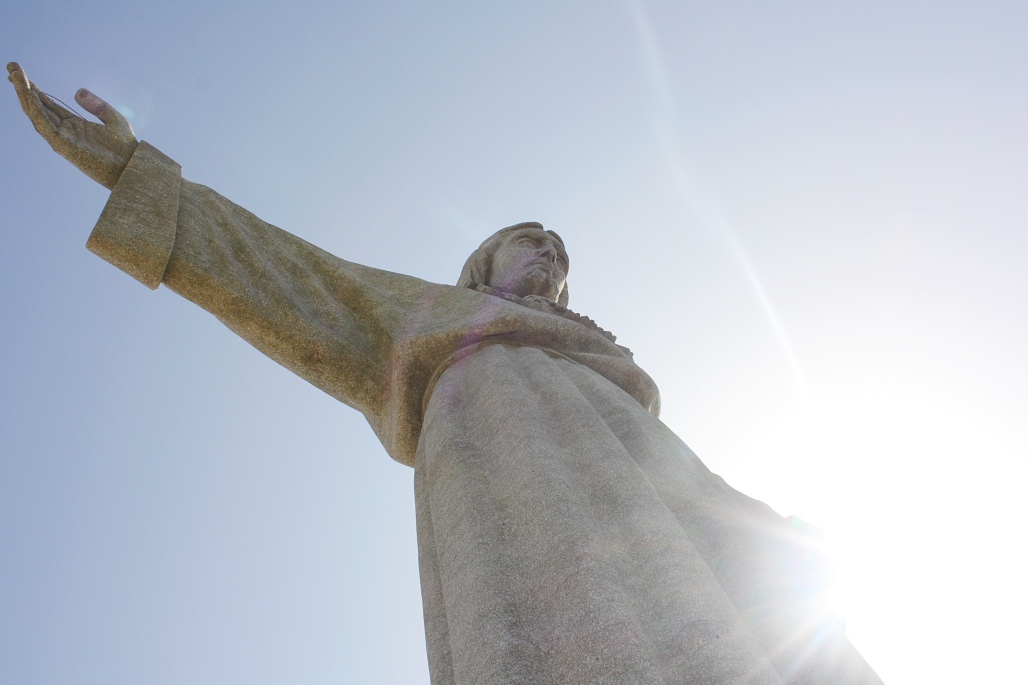 Since the three of us tackled the actual city in a mere day, you can imagine all the lovely places I have to share with you. But no worries, I won’t overload you with photographs in this post, I’ll share this beautiful vivacious city in parts, mostly because it allows me to calmly go back and savor these memories once again. Being as Lisbon is the capital city, you can imagine the immense history it has. It’s home to many monuments and buildings that were the foundation of Portugal, represented its growth as a nation and shaped its rich culture. 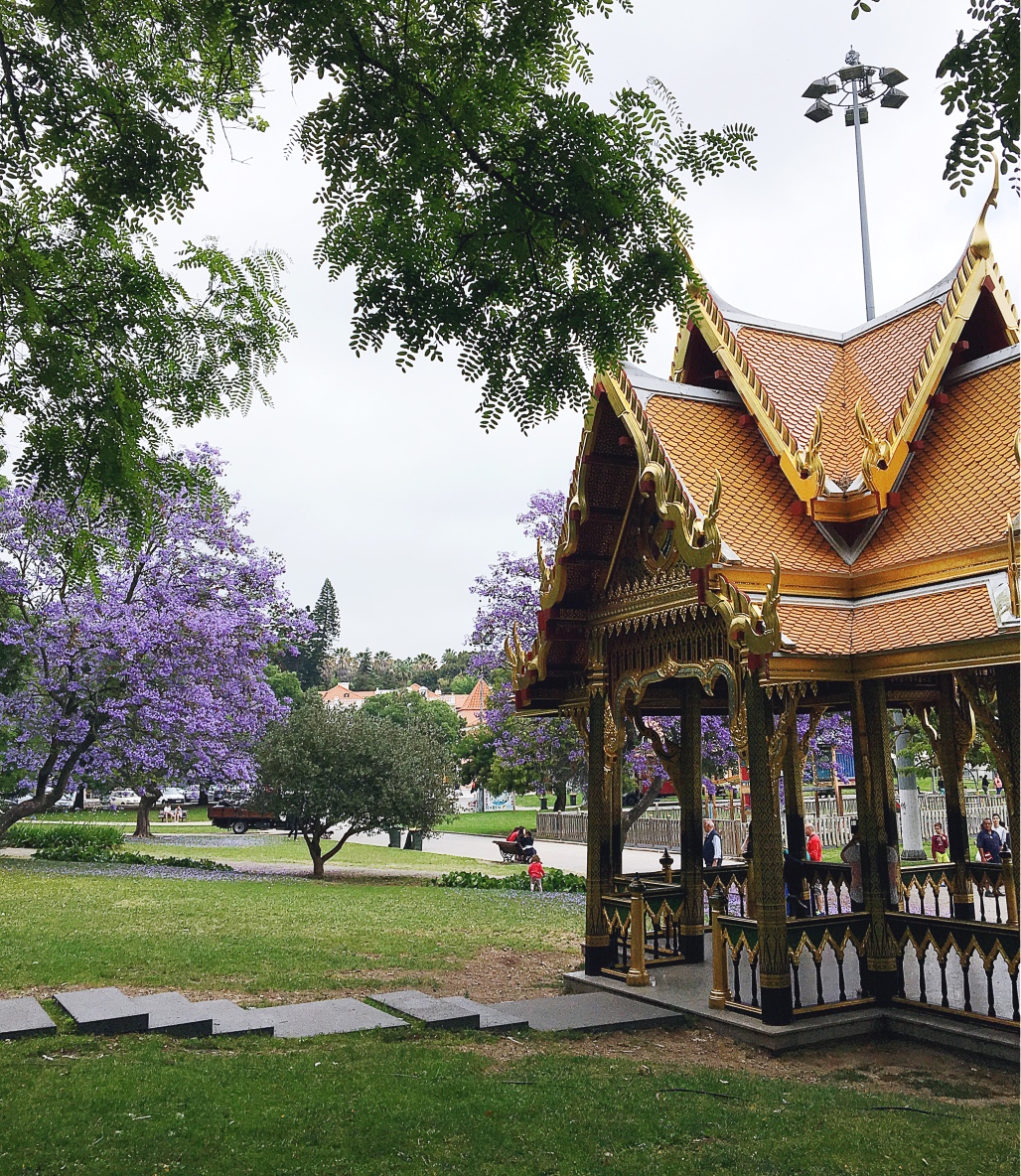 To begin your tour of Lisbon, I suggest you head downtown to the Belem area, along the Tagus River bank where you’ll find three of the most important landmarks in Portuguese history. First you have the Padrão dos Descobrimentos, a stone ship masterpiece with perfectly crafted statues representing the pioneers of the Age of Discovery during the 15th and 16th centuries, with Henry the Navigator at the tip.

Often not highlighted like the English or Spanish, but for many years Portugal ruled the seas, paving the way for new trade routes and discovering countries. The Padrão dos Descobrimentos marks the location ships would depart from on their journeys to India and Asia. 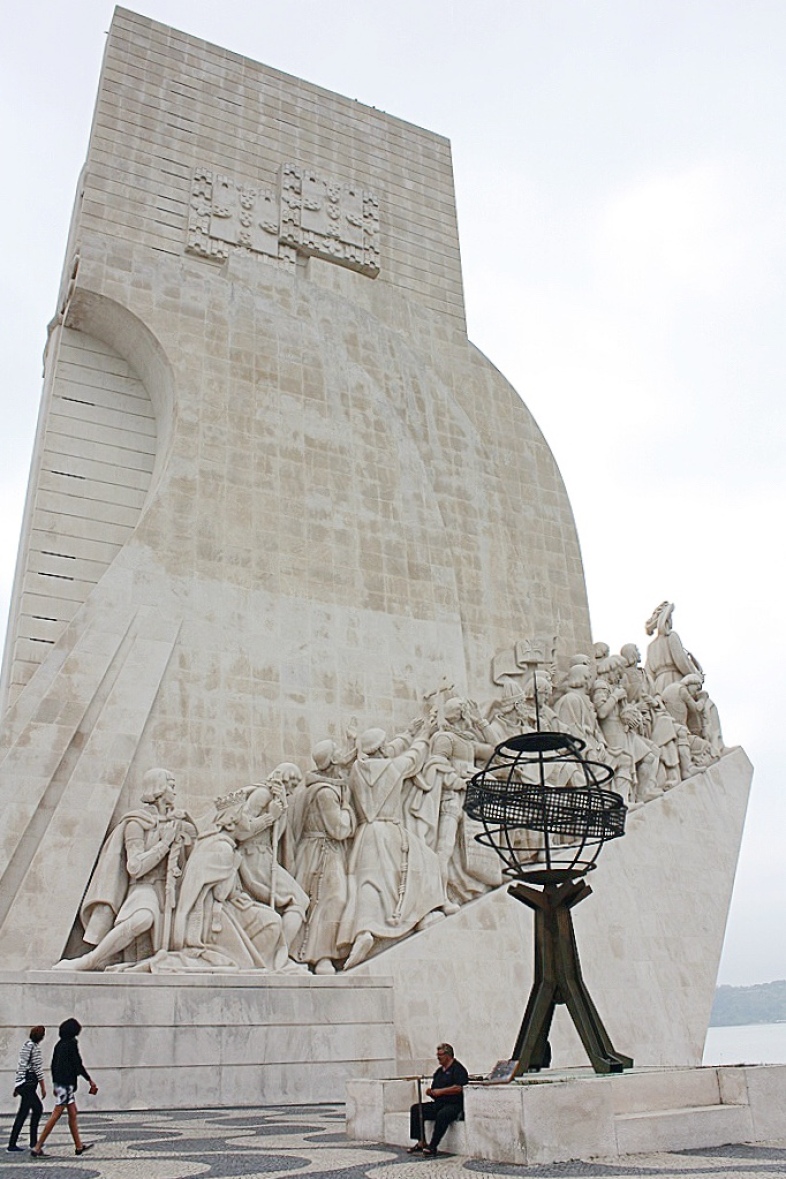 In the far off distance, even on a cloudy morning, you can still see the Ponte 25 de Abril and Cristo Rei.

Walk a few steps, and you will see one of Portugal’s most iconic and picturesque monuments, the Torre de Belém. I don’t need to tell you just how amazingly gorgeous this castle is, but I will, because these photographs just don’t do it justice.

The bay had been dry from lack of rain, but its moat is often filled. Doesn’t this stunning building look as if it were created for the Game of Thrones world, it even built on it’s own island. It’s intricate stone work is like no other, a true representation of Portuguese Manueline architecture. This tower was very important during the 16th century serving as part of the Tagus River’s defense system. Unfortunately we couldn’t go in and see its stunning interior due to a local strike, but my next trip I’ll definitely be going back. The Torre de Belém is by far one of my favorite buildings in the country and even on a cloudy morning, its magnificence captivated me. 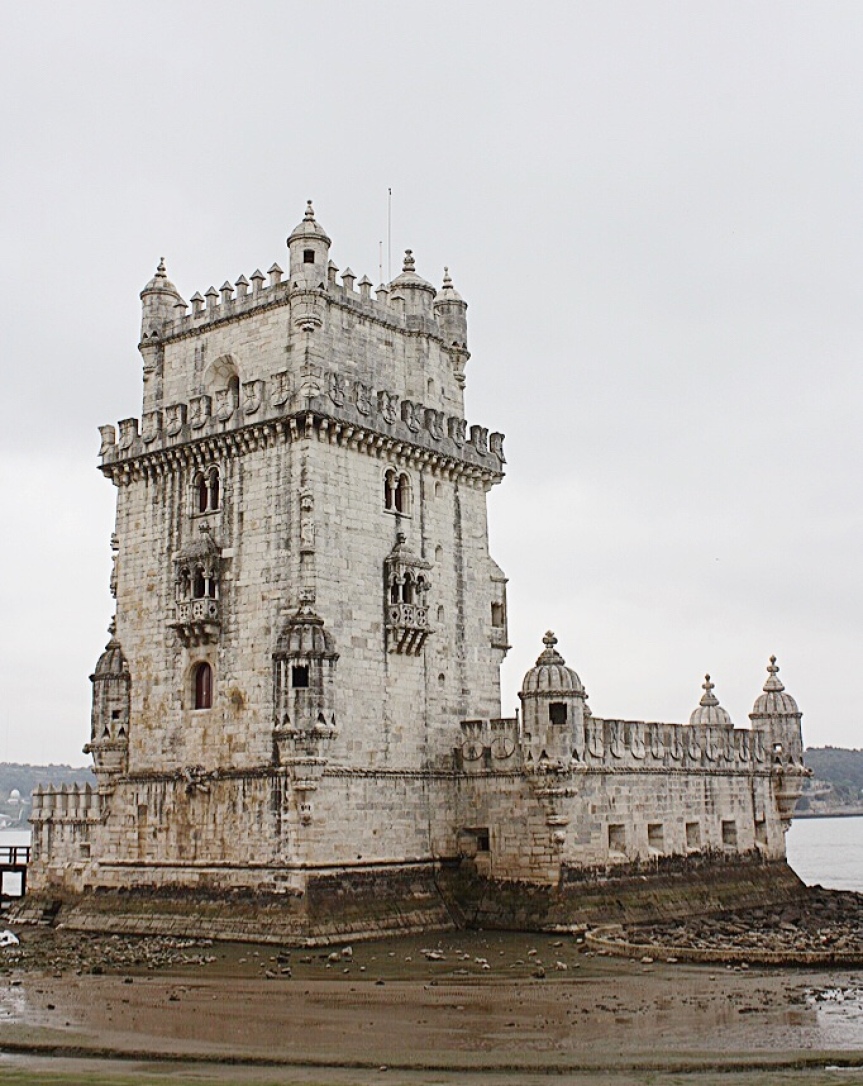 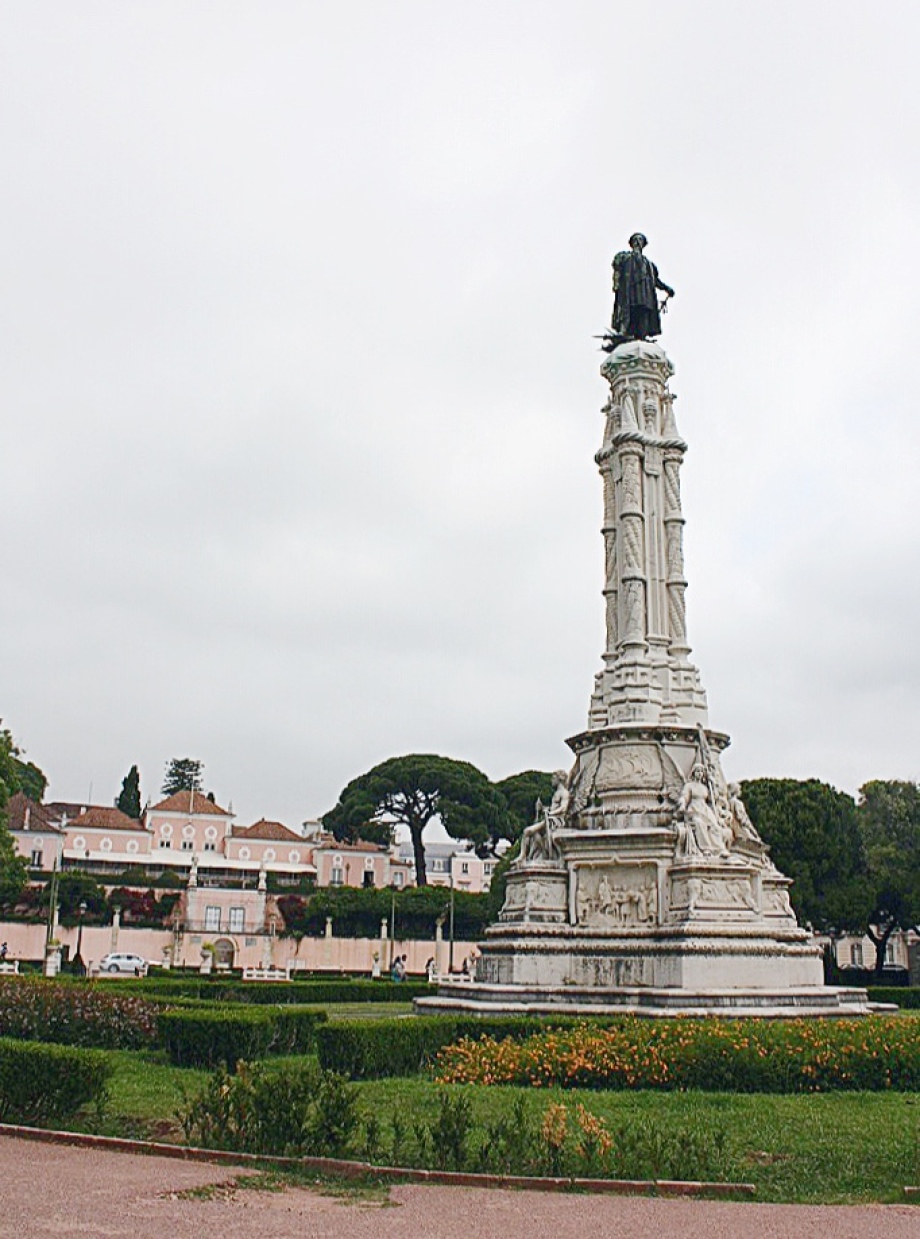 The last of the important historical landmarks is the equally stunning Jerónimos Monastery. The monastery is the epitome of Portuguese late gothic Manueline style of architecture. Along with the Torre de Belém, it’s one of Portugal’s UNESCO World Heritage Sites. Its style reflects natural elements and maritime objects discovered during naval expeditions.

Jerónimos is an important landmark for the country’s history, housing numerous important literary works, as well as the tombs of Vasco da Gama and Luis de Camões, two of the most important figures in Portuguese history and some of the country’s earliest royal families.

The exterior of Jerónimos sure is a masterpiece, but the interior leaves you speechless. Well, at least I take my uncle’s word for it because when we got there the line to enter was so long it created “S” shapes to the other block. The second I buy a ticket to return to Portugal, I’m making sure I do so for Jerónimos too, because I’m not passing the chance to see its exquisite structures.

I loved touring these sites alongside my uncle, who filled me with historical facts and knowledge only someone who lived and experienced Lisbon through its years of revolution, growth, and rebuilding, could understand.

If you think these places are beautiful, just wait until I share the heart of Lisbon. There’s plenty more beautiful architecture, pretty pastel houses and terra-cotta roofs. 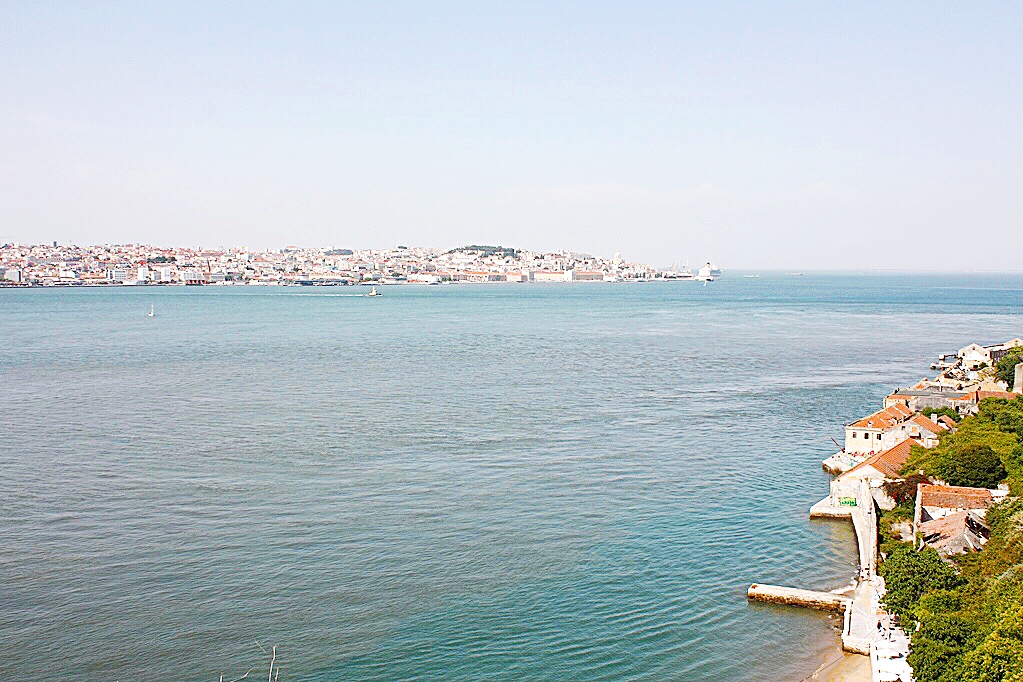 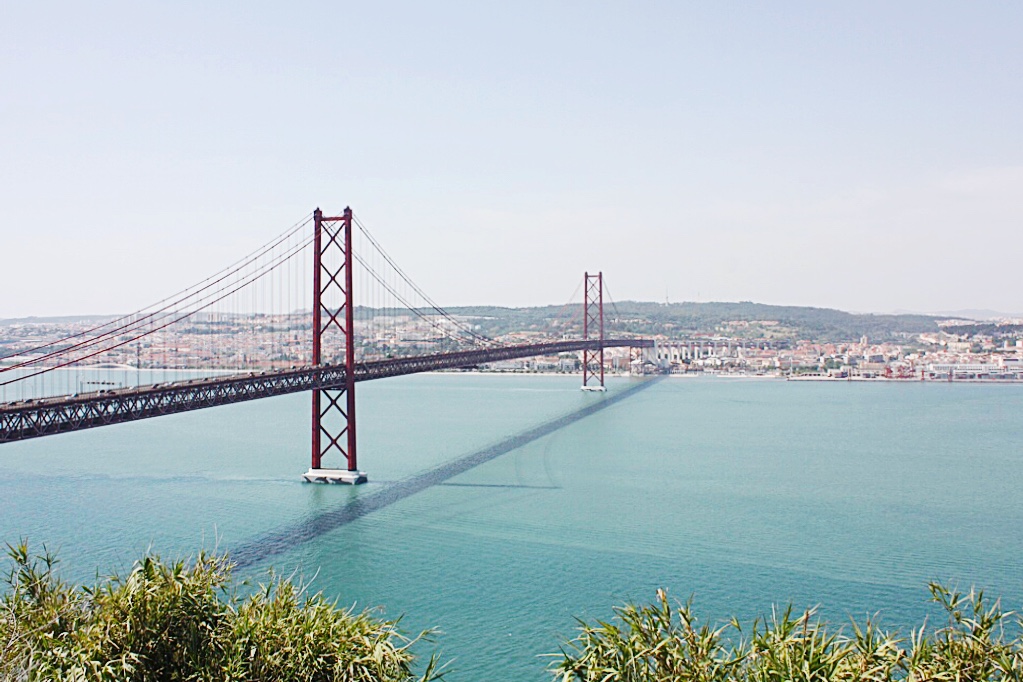 I love everything about entertaining. Flowers are my weakness, a slice of homemade pie makes my heart sing & I’m a sucker for wedding videos. Travel is a constant source of inspiration and motivation. I dream about these things, it’s true. But what I love most, is working with amazing people to create meaningful & unique celebrations…..

Woke up feeling a bit more hopeful & lighter after

I love everything about entertaining. Flowers are my weakness, a slice of homemade pie makes my heart sing & I’m a sucker for wedding videos. I dream about these things, it’s true. But what I love most, is working with amazing people to create meaningful & unique celebrations…..

Whether it’s your wedding, birthday, shower or custom dessert – Dreamery Events believes you shouldn’t have to worry about anything except celebrating and making wonderful memories.